I find refreshing inspiration through the works of Neo Rauch. Although I have never seen His work in person I am drawn to them as if there is some kind of magnetic pull between his work and my imagination. There is a Dream like quality that I am drawn to similar to Salvador Dali or Frida Khalo.

Rauch’s works are characterized by an illustrative style with ambiguous shapes and an arbitration of forms in space as if the rules of perspective are completely disregarded however the figures and beasts he creates all seem to exist on the same plane. Rauch explains his work is preconceived before he starts, as the work develops he allows an organic composition to shift and change creating its own natural circulation. With this explanation I tend to agree with his sentiment that he is not a surrealist but it’s easy to see why critics would categorize him as such.

One element I appreciate about Rauch’s work is the hauntingly playful scenes he depicts. There is a juxtaposition between manual labor or middle class citizens and science fiction. In many of his scenes it seems as though an average citizen has made a startling discovery like in a 50’s science thriller. I find a subtle connection between the “discovery” in his paintings and my own. I try to create a moment of confusion for the characters in my paintings as the viewer tries to make that discovery as well. I find this especially true in my series of Navy Paintings, specifically “Wog Day”.

I often look to Neo Rauch for inspiration in my own work, although there may not be any clear reference I find his content helps guide me. It’s an interesting feeling viewing the works of an artist through the scope of the internet and creating a preconceived notion on what the art piece seems to be. It’s not until we see them in real life and get to enjoy the a painting in person that we fully get to experience it. Some works are overwhelming in person like Manet’s “Rag Picker”, while others are underwhelming.

I suppose the point of this weeks blog post is to go out and enjoy some art in person. Find your favorite artist and study their work there really is an emotional connection. That is one of the reasons I have selected my last three artist blogs, I still feel that initial response to experiencing those works at the 2017 Whitney Biennial. I would love the opportunity to have that experience with Rauch’s work.

Chuck Close is on the top of the list of favorite artists for myself and many figurative painters. He mastered the portrait long ago and then reinvented his process after he was debilitated by a disease. It’s hard to disagree with my statement when his paintings sell for millions of dollars and are permanently housed at huge museums and in notable collections. His astonishing portraits are huge and broken down into so many tiny squares his work literally transforms before your eyes as you get up close. Pardon the pun.

Lately he has been notable for allegations of sexual misconduct, which brings about a question circling around art collectors and appreciators. Should there be consequences towards artists who are morally corrupt? Not to say Chuck is one of them, he wasn’t charged with any crime and denies the claim. But it does arouse an interesting point. Art history is wrought with sexual deviants, murderers, pedophiles, mysoginists, psychopaths, drug and alcohol abusers… the list goes on. If we were to rid the museums and collections of artists who fell into this category the walls of the world would be bare. As I’ve said in the past art is a reflection of the times. While it was common place for Leornardo DaVinci to seek pleasure in his young male models, todays society has no room for such deviance.

With the “#MeToo” movement in full swing Chuck narrowly missed the chopping block. Curators and gallerists has a discussion on this very topic and what to do with artist who fell into the category of sex abusers, with one allegation the art community was ready to crucify Chuck Close. In recent history we have worshipped and learned about artists in class that were overtly mysoginistic Pablo Picasso and Egon Schiele are the first that come to mind. We see avid collections in museums and in private of both artists.

It’s a fine line we tip toe when freedom of expression stifled but it is not a person that controls the art market it is culture. A collection of values and perspectives that is constantly shifting and changing into a new generation with new taste, this makes up the contemporary art world. We must recognize that it is a reflection of current events and not shift our focus to the past. It would be a disservice to tear Picasso’s and Close’s off the walls. It is better to reflect and recognize that those were different times with different ideals. 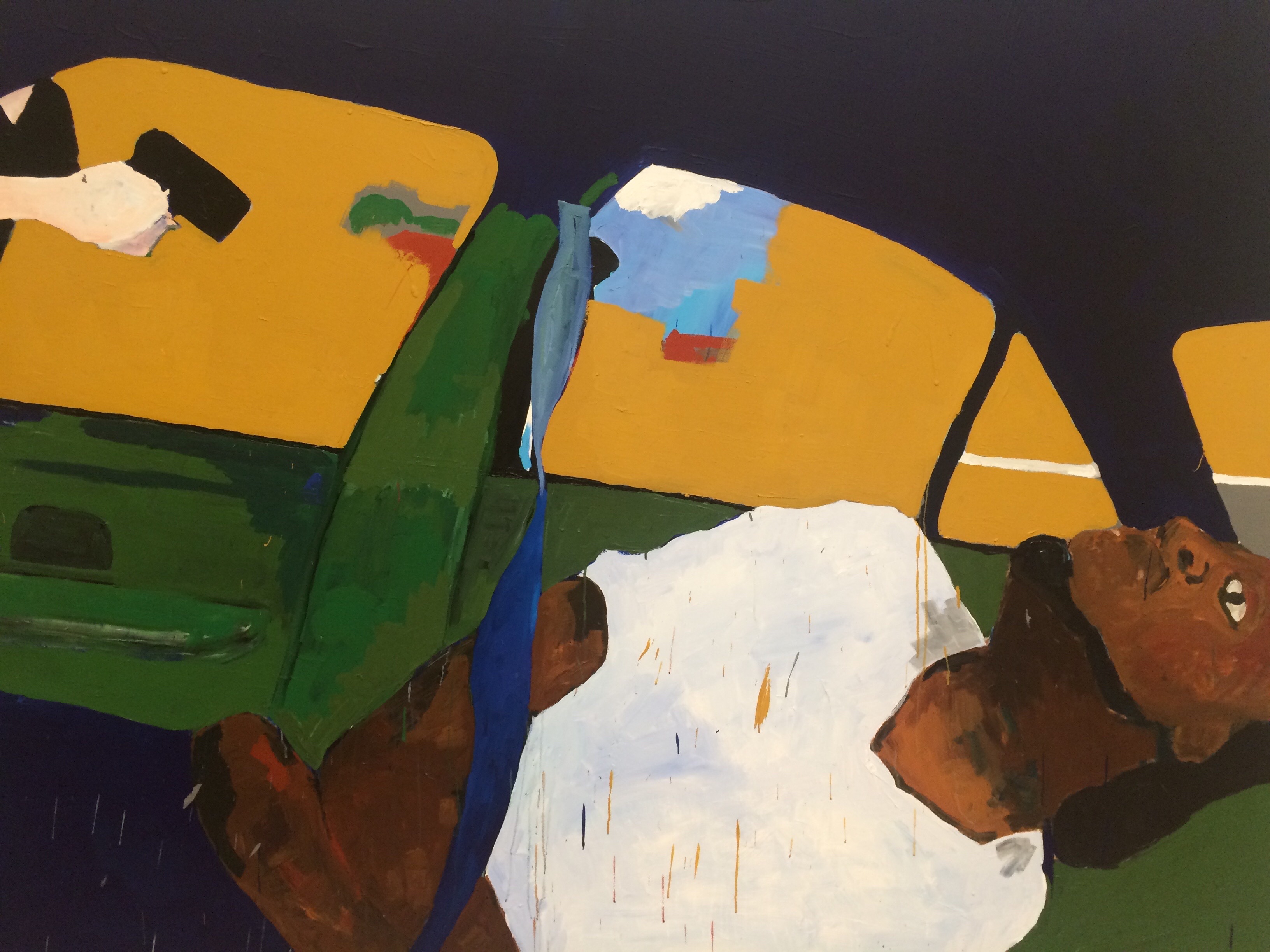 Henry Taylor’s “The Times Thay Ain’t a Changing, Fast Enough”, depicts the violent and tragic death of Philando Castillo. The title of the painting concisely reveals the artists position towards the current political climate and discrimination the African American community struggles through continuously. Taylor’s subject matter is very openly a statement for social justice but also appears to be a beautiful abstract narrative with balanced color and composition.

Before his appearance at the Whitney Biennial his paintings were classified as outsider art which pushes his work into the category of “naive” figurative paintings. It was also criticized as though it appeared to be created by a “self-taught” artist. This painting and his others are anything but that. His work is direct and potent, also it is a reflection of Taylor’s experience. The painting is a revealing perspective that casts the audience in Castillo’s fiancés seat as she watched her soon to be husband die. The simplified shapes and colors create a very direct composition.

If the subject matter doesn’t instantly grasp your attention the opaque colors are equally captivating. It’s hard to ignore the subject as a gleaming white eye unblinking stares into the gaze of the viewer. The white of the eye instantly pulls my attention to the white mass of the figure which contrasts heavily with the black headliner of the interior of the vehicle, Phillando’s last view. The black pigment instantly pulls me to the dark shirt of the police officer and then the murder weapon. The large swath of orange reads as a cautionary hue. The actual view through those windows might be blue considering the small patch of blue sky flashing only momentarily in the top middle portion of the composition. That little patch of blue symbolizes hope until it drags you down the seatbelt and over the body of Philando and back into the green interior of the car. The colors and shapes of the composition are masterfully placed by a skilled artist who intentionally guides the viewer through this scene. The placement of each value is done purposefully and causes an involuntary scanning that demands attention on key elements.

James Taylor has a unique ability to combine content and color in such a way that the image is clear from across the room. He uses large scale to produce a monumental vision of what he wishes to portray. This strategy is beneficial to his message of racial inequality. The way he transforms figures into big colorful shapes allows the image to fall into an abstract narrative and feels accessible to someone as naive as myself. When I saw this painting at the biennial I stood in front of it and was forced to contemplate my own life and my privileged existence. In this moment I realized how successful he was at portraying his message. 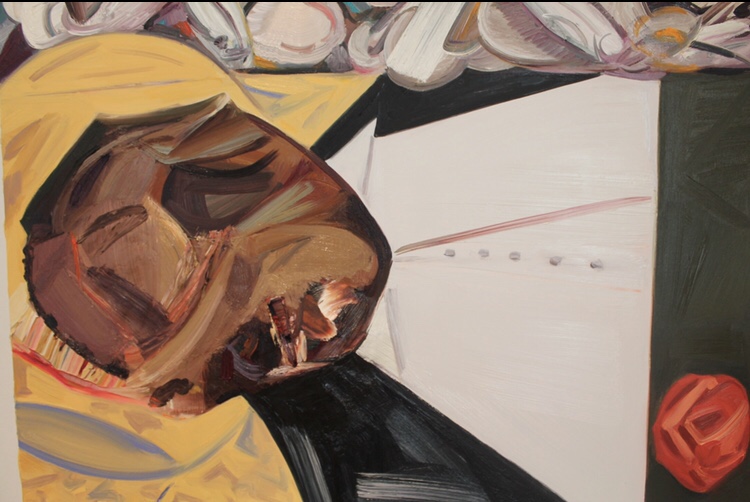 The 2017 Whitney Biennial was filled with impressive paintings and a lot of multi media works from various artists, the piece that created the most dialogue was Dana Schutz’s “Open Casket”. While the painting seems a little grotesque, the event it portrays is far more sinister. For this reason her painting polarized the art world, bringing attention to the issue of cultural appropriation.

The painting is an abstract depiction of Emit Till’s corpse. To understand the significance of the piece it’s important to know the history behind the boy being portrayed. He was killed in 1955 by a group of white men for allegedly whistling at a white woman. The men who committed this heinous act received little to no punishment. They lynched Emit then dumped him in a river, his body was so mutilated that his remains were unrecognizable to his own mother. Emit’s mother chose to have an open casket funeral to show the brutal reality of the black experience in the South. This gesture was one of the catalysts that helped spark the Civil Rights Movement.

The chief complaint was that Dana’s depiction of Emit’s mutilated corpse was painted with soft colors and loose brush strokes which softened the harshness of the situation. The opposition claimed that because she is a white artist she had no business portraying a symbol that belonged to the black community. While I can not deny that white privilege exists, Dana’s rebuttal was well thought out and sincere. She claimed that, she was commiserating with Emit Till’s mother as a mother herself and the message she was portraying was meant to empathize her sorrow towards humanity rather than exploit a tragedy.

I believe this painting is good for multiple reasons. One reason is the controversial nature, I’m sure Schutz knew this piece would be met with some sort of opposition especially considering the tumultuous times were living in presently. Also the racial tension experienced in this country has created a divide, the contrast between the artist and the content clearly demonstrates this point. This subject was poignant at the 2017 Whitney Biennial between Kerry James Marshal, and a submersive VR experience where the viewer becomes the assailant as a man is beaten. All these artists are trying to be relevant and create dialogue; therefore, Dana Schutz was successful in her endeavor creating a very notable piece.

All of the best artists through out time have been met with resistance. Art is a visual representation of culture from the present time the artist made that work. I don’t think art should ever be stifled or censored, people will likely remember this piece for the events surrounding it rather than the content portrayed. Inadvertently the people that requested the paintings destruction gave it more power by giving it that recognition. The point is artists especially in America should be free to express themselves without limitations; however, they must be willing to face the consequences. Dana Schutz did not need to ask permission or apologize she painted a subject matter that is clearly volatile; thus, capturing the current racial, political climate. Overall the piece stands alone and forces the viewer to really contemplate the image before them, this to me is the essence of a powerful piece and a thoughtful artist.